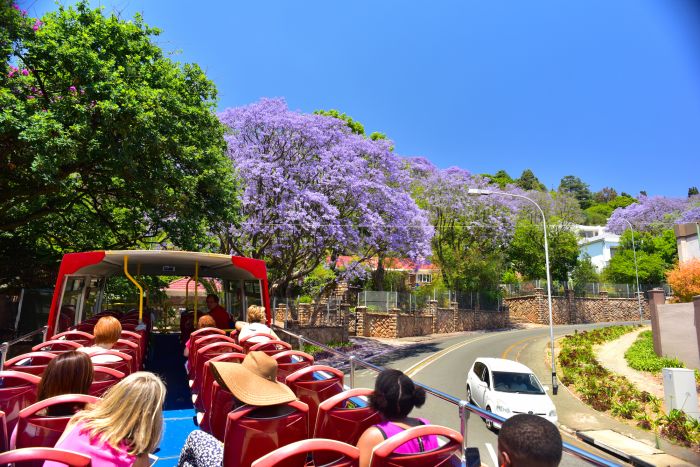 If you are looking for a Johannesburg City Pass, we have the experience that will give you an insider’s view of Johannesburg and take you to the main tourism locations. Johannesburg is the commercial hub of South Africa, and while not as much a tourist city as Cape Town, you can still get up to a decent amount of activities.

You can experience the city from an open-top bus with views of popular tourist destinations and cultural sites.

There is a hop on hop off tour bus experience in Johannesburg. They it has 3 different packages available, which include 16 stops and covers 20 of Johannesburg’s most popular tourist attractions. The hop on hop off buss runs on a popular route with a designated schedule. You get off at which ever stop you want to and you need only show your ticket to board the next bus.

The booking also includes FREE hotel shuttle from a number of select hotels, all based in Sandton which is Johannesburg’s most popular suburb and where most tourists stay.

There are three packages available, which are the 1-Day Ticket, 2 Day Tickets and the 1 Day + Soweto Combo. The packages cover two routes.

The red route is in the city centre of Johannesburg and you will see the following sites.

The Soweto Tour can be added to any of the above tours on a 1 day ticket. This will be a 2-hour live guide where you are guided through the famous township by a Soweto resident. You will see the following sites.

There is no city pass experience that includes discounts on entrance to various attractions in Johannesburg because the entrance fees to the attractions are generally very affordable. For example, the Hector Pieterson museum charges adults R30 (approximately $2) and R10 (less than $1) for pensioners and students.

A city pass will require you to plan your trips in advance and set out a route. In Johannesburg, because entrance is inexpensive at the main tourist attractions, you will value the convenience of visiting places in the order that suits you. There is, therefore, not much of a demand for city passes.

The tours are available everyday and run between 9am and 6pm. There is a bus available approximately every 30 minutes. There is an airport shuttle from the select hotels and City Sightseeing can also be reached by the Gautrain, as they are right near the Gautrain station. Tickets are valid for 14 days after the date of purchase.

And there you have it, a value-filled collection of sights to discover in the City of Gold. While Johannesburg doesn’t have an official city pass as in other places around the world, the packages above provide a good offering that adds convenience into your exploring of the city.