Today we have some South Africa travel advice to help you navigate your way through SA. South Africa is a great travel destination and there are some nuances that you need to be aware of. Some of these are unique to SA so read on so that you know exactly how to operate when you touch down in the country.

If you are driving, know which areas are not safe. In South Africa, all affluent areas will have a low income area nearby. This is because the labour force usually comes from lower income areas known as townships. Townships often start out as informal settlements near the area a suburb with the economic activity so it is a common trend in South Africa to have a township near a business hub. If you are driving, it is best to map out where you are going beforehand, and know which place you don’t want to get caught up in. Google Maps does not take into account these low income areas and you could easily find yourself driving through a place that is not safe. This would be a problem, particularly at night. A simple example is Sandton in Johannesburg, which is right next to Alexandra, a township right across the highway. As you can see from the map below, depending on the traffic, the route to Bedfordview (a wealthy suburb) on Google Maps might take you on the grey route which is through Alexandra (a bad area), which is very unsafe. 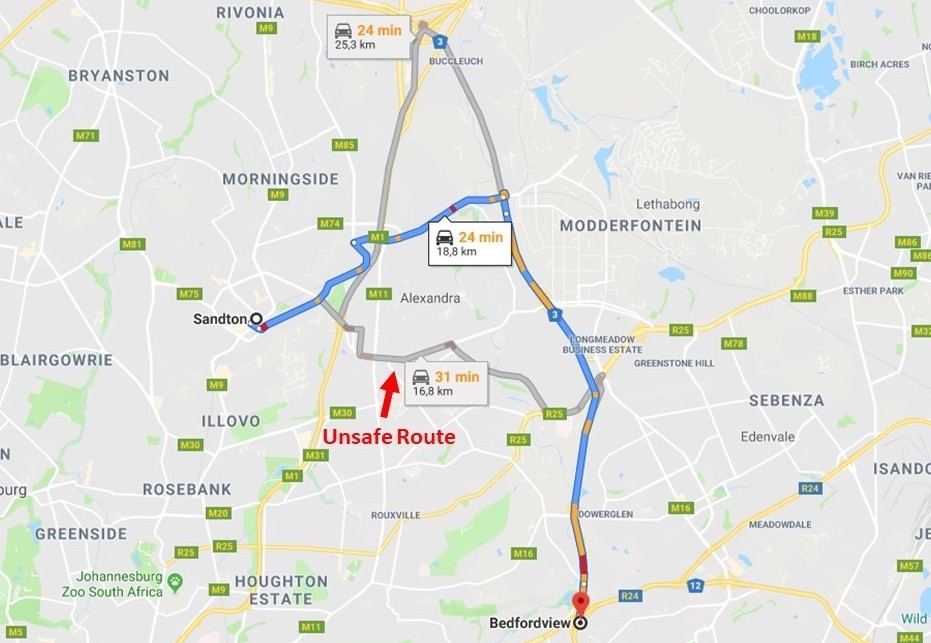 If you are taking an Uber then there should be no need to worry since the driver would know where not to go. The only form of public transport that is advised in South Africa is the Gautrain. This mode of transport is safe and runs through stops that are safe like the airport, Sandton city centre, Hatfield, and other safe areas. So ideally, if you aren’t familiar with transport here, you can just use a combination of the Gautrain and Uber. You can find schedule for the Gautrain on the official website.

In South Africa, tipping is optional but it is customary to tip 10% for a waiter who has served you. In many instances, waiters earn based on tips alone, so if you someone has served you well enough, do tip them 10% as the basic for their earning. If they did particularly well, you can top them 20%. There other thing in SA that are done differently like packing your paper bags or pouring petrol. In South Africa you don’t have to do these yourself, there are appointed packers and petrol attendants whose job it is to do that. While it is not mandatory, you can tip them R5 for this kind of assistance if you want to.

The Malaria Areas of South Africa

South Africa does not have much in terms of environmental diseases but malaria is a definite issue. Malaria is common in the north-east region. If you are a city slicker or at the coast then you need not worry about this. But a lot of visitors to South Africa will want to tend to go on safari trips. One of South Africa’s most popular travel destinations is Kruger National Park. You can get close to all the animals you want to see while in South Africa, including the Big 5. The region is a malaria area so if you are in the area, take malaria prevention medication before you go there. Below is a malaria map of South Africa, that shows all the area and the level of Malaria risk. 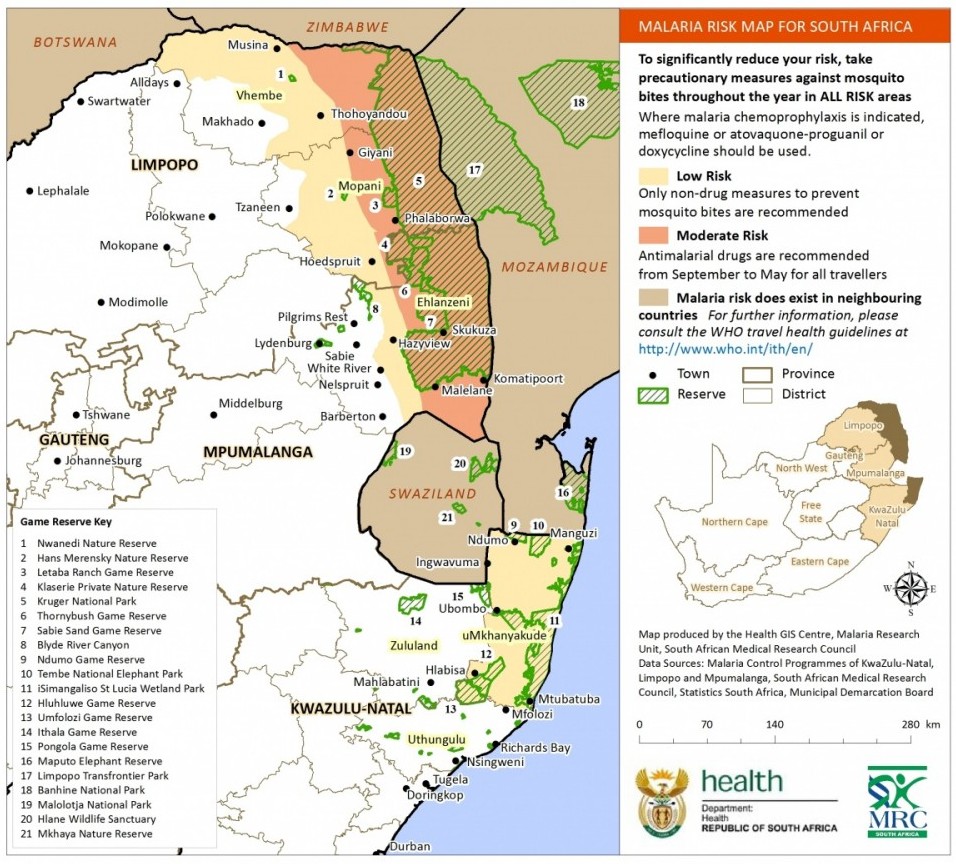 When in malaria areas, make sure to take the proper precautions when the sun starts to set. These are things like wearing long sleeved clothing to minimize the chances of getting bitten and using mosquito repellent. Mosquito nets should also come as a standard in any hotel or accommodation worth its salt so if you are unsure, ask the hotel that the have mosquito nets.

If you are looking for interesting spots or want to discover some new locations, don’t be shy to ask the locals. Two reasons. The first is information. South Africa has come a long way in developing itself as a country. There are still cases where we are behind. One of these is the availability information online. Data in South Africa only became affordable to the masses around 2016. Because data was affordable, scores of would be bloggers and content creators simply could not afford to access the internet so information is not as abundant as elsewhere in the world. This means that a lot of the places outside of Cape Town don’t have much coverage and in many cases, information is outdated. So you stand a good chance of getting a better scoop from a local. Second reason to ask is because South African are very friendly to tourists. This is particularly true in the places that aren’t Cape Town. Cape Town is different because it is a popular holiday destination and because repeated exposure to tourists has caused some of the novelty to wear off.

Don’t carry more cash than you need to. When roaming around in South Africa, you don’t need to carry excessive amounts of cash. Doing so puts you at greater risk of being pickpocketed, or maybe even robbed upfront if you are in a dubious area. If you have to carry cash, don’t carry more than R1000 without purpose. Ideally, can carry about R200 or R300. Beyond that, you can swipe for most of your monetary needs. There are sufficient VISA and MasterCard swipe points at most of the places that you will be visiting as a tourist. When you swipe, the transaction will always happen in your presence. Do not give any person your bank card for them to do anything with it outside of your presence.

Data connectivity is very important when you are traveling. When you are on the move, you will need it to read reviews of certain places that you want to visit, or to navigate to the place that you want to go to. Not all mobile network operators are created equal. There are four major mobile networks in South Africa, Vodacom, MTN, Cell C and Telkom. When it comes to reliability of reception, Vodacom is simply the best there is in South Africa. The problem is that it is also the most expensive and by a lot compared to other options. MTN is similar to Vodacom.

The other two networks, Cell C and Telkom Mobile are good enough in the city but not perfect. Out of big cities, though, is where they become really problematic and you can really struggle with connection. The flip side is that they offer much cheaper data rates than the other two. So if you are in the city, you can choose Vodacom if you want seamless data reception but at a premium price. If you want to save costs, you can use Telkom or Cell C but they will have some momentary reception issues. If you are going outside of big city centres to remote areas. Simply stick to Vodacom, and to a lesser extent, MTN.

This does not apply just to South Africa, but to any other place in the world that you visit. Yes, you are almost guaranteed that you will butcher the language while you are at it, but that effort goes a long way to locals. Just something that simple will make the people much more receptive to you and often willing to go out of their way to help you. You can simply start with a local greeting, and then proceed in English. The most commonly spoken language in South Africa, after English, is Zulu. The way to say Hello in Zulu is Sawubona. Another way of greeting is Dumela, which is in the Sotho language. Both will be understood by all so feel free to use any one.

If you are driving in South Africa, you will see “car guards” at every parking lot you go to that is not does not have a fee. Most of the time, they are not appointed officers, but simply individuals who stand there to make money. When you come out of a shopping centre, they will probably help you with unloading a trolley or directing you out of your parking stop. Some people tip them for that and if you have been helped, and are feeling generous, you can tip them. You must just understand that for the most part, they are not appointed by anyone there and they will also not keep guard of your car so do not think that your car is under any particular sort of protection from car guards. Tipping them is completely optional and if you do not want to part with your money for assistance then that you didn’t ask for, you are free to not do so. 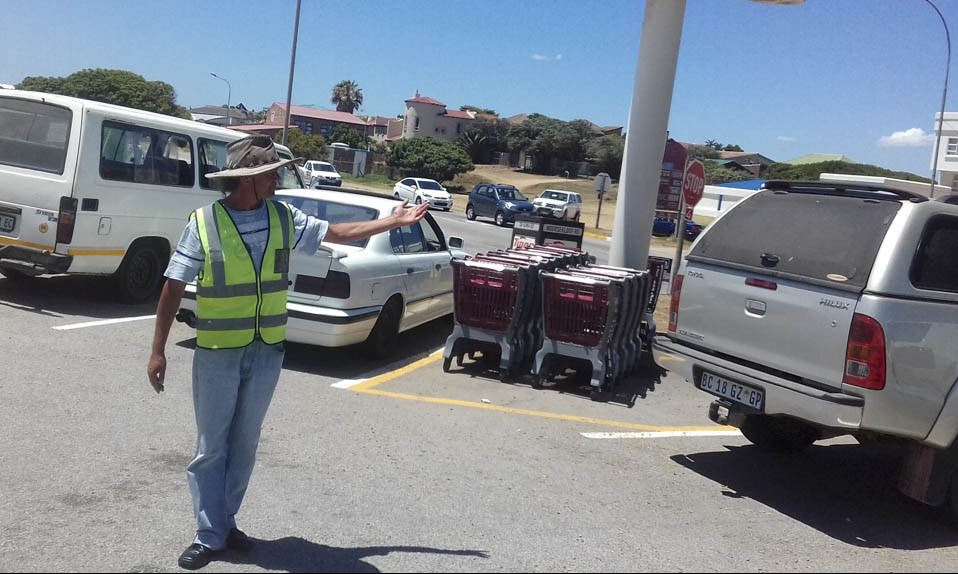 Inflated Bills in Nightclubs and Bars

If you are going to be hitting nightclubs or bars where things get rowdy and you get under the influence, there is a small possibility that you might encounter the situation of an inflated bill. It is not something that is prevalent, but it is a definite possibility and something you must be aware of in case it ever happens to you. It is more true with tourists because the expectation is that they have more money and might also be too nervous to dispute an inflated bill. Sometimes, opportunistic waiters might inflate a bill of patrons if they think that they are too drunk to keep track of what they are ordered. It can be a meal or drinks being brought to your table that you did not order. If you ever find such a thing happening to you, and you know that you did not order or consume the amount that is on your bill, simply explain politely that you know exactly how much you ordered, and pay for what you owe, and not more than that.

All in all, the moral of the story is that you must just be prudent when you are traveling in South Africa. A lot of the things you need to observe apply to any other big city in the world. A lot of it is common sense, like not being flash with valuables or walking around in dark or isolated places at night. Beyond that just inform yourself before a trip, exercise a reasonable awareness of your environment, and you will be just fine.

Did you find this information helpful? What part of South Africa are you planning to visit and want to know more about?